Posted on February 2, 2018 by ruthshedwick 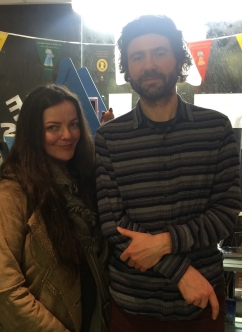 I met Tom Cox this week at Write Blend bookshop as he continues his Winter talks. Listening to him regale tales of his family, cats and haunted surroundings hit me with a sense of nostalgia. I had met someone on the same wave length. From the flares to the potty mouth, being born under a full moon and the nod to folklore and supernatural, stopping to take photos of gnarly trees, waiting eagerly to catch sight of badgers in the garden and of course the passion for cats. I was looking at the male version of me!

We talked about living on remote moorland farms in cottages that get a battering from the elements and certainty of being snowed in when the white stuff falls. Another thing we had in common. His question ‘are you going to be ok getting home?’ suddenly hit me… I had set off while it was snowing and didn’t think anything of it at the time. You see, living on the moors at the top of a winding, wizened lane, in the middle of nowhere; you are always at the mercy of the British weather – you start to utter the Scout motto ‘always be prepared’… though I wasn’t prepared that night. 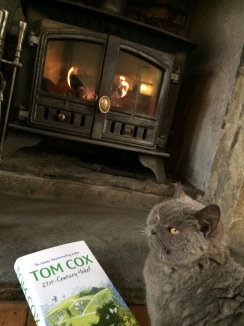 The thing of it is, I had become a hermit. I had experienced redundancy four years ago, an uncertain future, combined with the break-up of my seventeen year relationship and having to move myself, cats and a wolf thrown into the mix I had slowly withdrawn from societies social circles and found a fondness for real ale. Sitting by my fire with the wind howling outside, cat(s) on knee, Siberian dog shaped draught excluder and reading the odd book from my eclectic collection, this was the life I had envisioned. Granted, not the added weight gain from the scrummy ale, but certainly the idyllic rural life.

It will be nearly two years since my life had a traumatic shake up and the concerning words from my sister (aka big sister life coach, entrepreneur and general wonder woman) saying I needed to get out and stop being a hermit, rang in my ears. Go out of the village? Meet people in the ‘real world’? The thought gave me palpitations. I just about manage a family get-together! I envisaged myself surrounded by black mist unable to breathe, and most likely a nose bleed or two, but there was something inside of me that said I should throw caution to the wind. And I did. And now, with the snow coming down outside as I stood in the Liverpool bookshop I did wonder if I could get back home without having to abandon my car at the bottom of the lane (minus walking boots and torch!).

But it was worth it. I met a guy whose work I enjoy reading and following his anecdotes on social media, and you know what… he’s exactly how you’d expect him to be in person – down to earth, witty and generally a ‘good egg’ (as Grandma would say). Chatting to some of the people who went to listen to Tom that night, I found out they’re actually regulars to his talks. They go to listen to his stories because he’s a really good storyteller and if you haven’t read his stuff then I’d encourage you to do so. Listening to him deliver excerpts certainly adds to the enjoyment of reading his work – so I’d also encourage you to pop along to his talks too.