Posted on February 2, 2013 by ruthshedwick 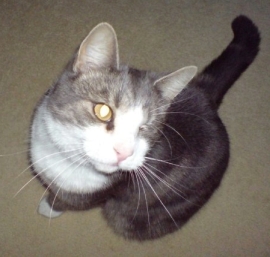 An ode to Eric [Felis catus]
I was chatting to a neighbour the other day and it dawned on me how much people really adore Eric. Four neighbours, five family members and at least six friends have all said “I’ll have him, we love Eric.” His belly swings with a rythmic bounce, his eye trained on your every move, he looks for your soft touch and flops before your feet. My beautiful (somewhat large) kitty Eric is adored by many. First time you meet him, your heart melts. How did he lose his eye? They all ask. Good question. Well, firstly I have to start at the beginning…..

It’s of no surprise to you all that I love cats. But please don’t assume I want to be inundated with cat paraphernalia. Quite the contrary.  I love cats because I love cats. What they stand for and simply who they are. I want to be surrounded by soft, loving creatures, not sterile impersonators. But I digress.

It all started when my niece lost her kitty. Tough times for an eight year old girl. Her father was also undergoing treatment so she needed that furry friend in her life. My sister and I took her to a local cat rescue and we walked up and down the pens. That was my first mistake. I already had five cats at home and my sister kept looking at me as if to say, “Are you okay being in here?” Truth is, no I wasn’t. I wanted to take them all and care for them and feed them and love them and make them happy. I closed my eyes and tried to ignore their sorrowful large saucer eyes that taunted my every move. We came to a pen with two cats and my niece knelt down and petted the kitty she had a connection with. A large white and black cat, the other, she said, was black with white. I watched her play with the kitties and I won’t lie, I did shed a tear. It was amazing to see the smile on her face again. As I drifted with my thoughts I turned to my left and thats when I saw him. He had been sitting on the ledge never taking his gaze off me. Eric. So called after Eric Cantona, we’re in North Manchester and Man Utd kinda rocks! and he was already named – I couldn’t change it. The nice young lady who had taken us to the pens smiled at me. “Oh, I see you’ve met Eric,” she said. “So how…” I began. The young lady smiled again. And I now know why – its the question everyone asks when they first meet him. “Lost it when he was a kitten. Cat flu.”All seven of the cats in the pens were hers and she was having to give them away because she had split with her boyfriend and moving in with her mother. Tough times for a young woman. I could see she was heartbroken saying goodbye to them all. Who wouldn’t be? 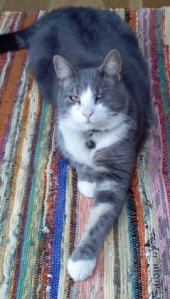 I asked to go in his pen and she gratefully obliged. I told her about my own cats and we did that bonding thing you do when you meet like minded people. Eric pawed me and purred loudly as I stroked his soft fur. I picked him up and he nuzzled my neck, he was a big boy back then. Two years old, one eye, but lots of affection. I melted. The sound he made in my ear was deafening – he was talking to me, telling me about his day. That’s when my gut tightened and heart thudded in my chest. “I’ll take him.” I said without ‘much’ hesitation. My sister was quick to turn around with a wide-eyed raised eyebrow look. I knew that look. She turned to my niece and laughed. “What’s Aunty Ruth like.” Indeed. 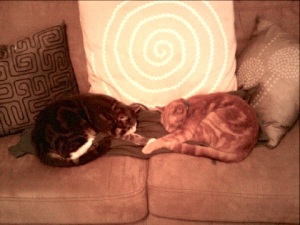 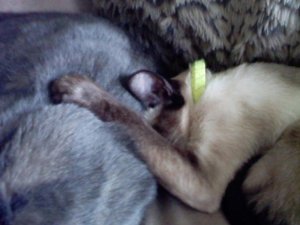 I’d just adopted a Siamese who I named Maggie. She had been dumped in a local nature reserve where my friend (the Local Nature Reserves officer) found her and her brother and sister. They were all suffering with cat flu. He took them to the RSPCA and we waited to hear if they would survive. He had always wanted a Siamese and said he’d take the other two. I adopted Maggie as her flu wasn’t as bad as the others, and I had other cats to think about (who have been inoculated, but safety first!). I left Eric to acclimatise to his new surroundings with Maggie. They got on very well. Little did I know, Eric gets on with everyone – I had nothing to worry about. 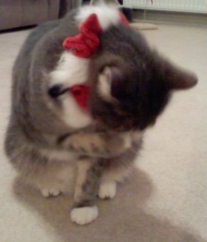 Over the years I’ve watched him grow into a loveable adorable little man. He casually walks into peoples homes, eats their food, sits on their laps and even their own cats don’t mind his daily visits. Come BBQ season, he regularly comes home with a little swagger, tail up in the air and whole chicken drumstick in his mouth – even with the serviette still attached. Come Friday, you can see him sat on neighbours wheelie bins pawing at food scraps, you’d think he never gets fed. Thing is – he eats all too well. I remember one particular day he came trotting down the close with a whole ham joint in his mouth! It was huge – someone’s Sunday roast was toast! And the only words you hear are “Oh, its just Eric.”